A global religious leader, philosopher, author and moral voice for our time, Rabbi Lord Jonathan Sacks is currently the Ingeborg and Ira Rennert Global Distinguished Professor of Judaic Thought at New York University and the Kressel and Ephrat Family University Professor of Jewish Thought at Yeshiva University. He is also Professor of Law, Ethics and the Bible at King’s College London. Previously, Rabbi Sacks served as Chief Rabbi of the United Hebrew Congregations of the Commonwealth between September 1991 and September 2013, only the sixth incumbent since the role was formalized in 1845.

Described by H.R.H. The Prince of Wales as “a light unto this nation” and by former British Prime Minister Tony Blair as “an intellectual giant”, Rabbi Sacks is a frequent contributor to radio, television and the press both in Britain and around the world. A visiting professor at several universities in Britain, the United States and Israel, Rabbi Sacks holds 16 honorary degrees, including a Doctor of Divinity conferred to mark his first ten years in office as Chief Rabbi, by the then Archbishop of Canterbury, Lord Carey.

In recognition of his work, Rabbi Sacks has won several international awards, including the Jerusalem Prize in 1995 for his contribution to diaspora Jewish life and The Ladislaus Laszt Ecumenical and Social Concern Award from Ben Gurion University in Israel in 2011. Rabbi Sacks was named as The Becket Fund’s 2014 Canterbury Medallist for his role in the defence of religious liberty in the public square. He was knighted by Her Majesty The Queen in 2005 and made a Life Peer, taking his seat in the House of Lords in October 2009. 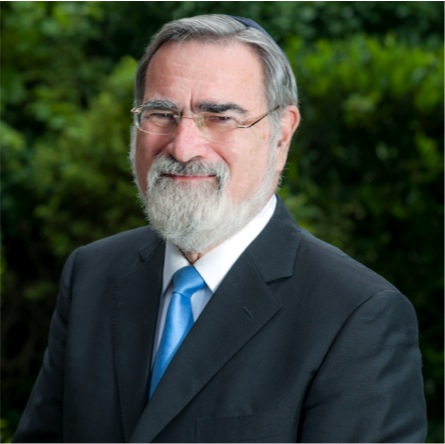 The author of 25 books, Rabbi Sacks has published commentaries to the daily Jewish prayer book (siddur) and has completed commentaries to the Rosh Hashanah, Yom Kippur and Pesach festival prayer books (machzorim) to date. His book The Great Partnership: God, Science and the Search for Meaning, published in July 2011, received widespread praise for articulating a way for religion and science to mutually coexist. A number of his books have won literary awards, including the Grawemeyer Prize for Religion in 2004 for The Dignity of Difference, and a National Jewish Book Award in 2000 for A Letter in the Scroll. Covenant & Conversation: Genesis was also awarded a National Jewish Book Award in 2009, and the Koren Sacks Pesach Machzor won the Dorot Foundation National Jewish Book Award for Modern Jewish Thought and Experience for 2013. His Covenant & Conversation commentaries on the weekly Torah portion are read by thousands of people in Jewish communities around the world.

His latest book – published in June 2015 – is entitled Not in God’s Name: Confronting Religious Violence and explores the roots of violence and its relationship to religion, focusing on the historic tensions between the three Abrahamic faiths, Judaism, Christianity and Islam. You can read more about it or purchase a copy here.

Born in 1948 in London, Rabbi Sacks attended Gonville and Caius College, Cambridge, receiving honors in philosophy. He continued his studies at New College, Oxford, and King’s College London, where he earned his doctorate in 1981. The same year he was ordained at Jews’ College and at Yeshiva Etz Chaim, both in London. He served as the rabbi for Golders Green synagogue and Marble Arch synagogue in London. Before taking the post of chief rabbi, he also was Principal of Jews’ College, the world’s oldest rabbinical seminary. In 1970, Rabbi Sacks married his wife, Elaine, and they have three children, Joshua, Dina and Gila and several grandchildren.

Not in God’s Name 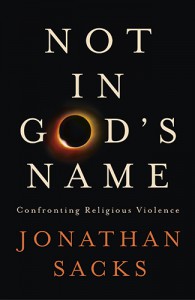 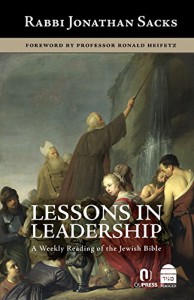 In this companion volume to his celebrated series Covenant & Conversation, Rabbi Jonathan Sacks mines the weekly Torah portions for insights into the nature of power, authority, and leadership. Based on the understanding that no man is born a leader, the book explores the principles, and perils, of becoming one. Profound, eloquent, and deeply inspiring, Lessons in Leadership reveals the biblical secrets of influence, as relevant now as they were three thousand years ago.

In the Hebrew Bible, when God reveals himself, he does so primarily in terms of law. Why is this so? What impact did it have on the nature of Jewish spirituality? And does this have a bearing on the current phenomenon of violence in the name of religion?